He was appointed Tánaiste in 1969. 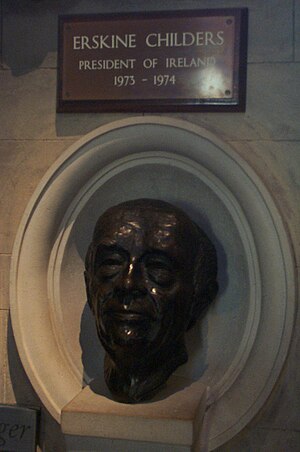 Childers was born in London. He moved to Ireland after the First World War and lived in County Wicklow with his father Robert Erskine Childers. His father helped bring guns to Ireland for the Easter Rising, and opposed the treaty that set up the Irish Free State. The younger Childers was educated at Gresham's School, Holt, and Trinity College, Cambridge, hence his striking British upper class accent.

In 1922, when Childers was 16, his father was executed by the Irish Free State. Before his execution the older Childers made his son promise from to find every man who had signed his father's death warrant out and shake his hand. [1]

After finishing college in Britain Childers worked in a tourism board in Paris, until Éamon de Valera invited him back to Ireland to work for the Irish Press. He became a naturalised Irish citizen in 1938.

As member of Fianna Fáil, he held a number of ministerial posts in the cabinets of Éamon de Valera, Seán Lemass and Jack Lynch, becoming Tánaiste Deputy head of the government) in 1969. Erskine's period as a minister was controversial. One commentator described his ministerial career as "spectacularly unsuccessful", but others praised his willingness to take tough decisions.

Childers was elected the fourth President of Ireland on 30 May, 1973, defeating Tom O'Higgins by 635,867 votes to 578,771. Childers, though 67, was an extremely hard-working and He died suddenly of a heart attack in November 1974, while making a public speech to the Royal College of Physicians in Dublin.

Childers' state funeral in St. Patrick's Cathedral, Dublin, was attended by world leaders including Nelson Rockefeller, Vice-President of the United States, Earl Mountbatten of Burma (representing Queen Elizabeth II), Harold Wilson, the Prime Minister of the United Kingdom and presidents and crowned heads of state from Europe and beyond. He was buried County Wicklow. At first it was expected that President Childers' widow, Rita, would be offered the office of president to continue his work, but it went instead to the former Chief Justice, Cearbhall Ó Dálaigh.

One of Childers' sons, also called Erskine was a UN civil servant and Secretary General of the World Federation of United Nations Associations. A daughter by 2nd wife Rita, Nessa Childers, is a councillor for the Green Party on Dún Laoghaire-Rathdown County Council.