Eswatini is a country in Africa. It is officially the Kingdom of Eswatini (Umbuso weSwatini). It was called Swaziland until April 2018.

Its capital is Mbabane. The country is named after the 19th-century king Mswati II. Eswatini was colonized by the British and the Boers at the end of the 19th century.[9]

Eswatini is a small country. It is no more than 200 kilometres (120 mi) north to south and 130 kilometres (81 mi) east to west. It is completely surrounded by land. Eswatini does not touch the sea. The two countries that touch it are Mozambique and South Africa. The country's two largest cities are the administrative capital Mbabane and the economic center Manzini. The seat of government is Lobamba.

Eswatini is strongly affected by HIV and AIDS. The 2012 CIA World Factbook showed Swaziland with the highest HIV infection rate in the world. Life expectancy is 50 years.

Education in Eswatini is free at primary level, mainly 1st and 2nd grades. It is also free for orphaned and vulnerable children. Children are not required to attend.[11] In 1996, the primary school enrollment rate was 90.8%. Girls and boys both attended at the primary level.[11] In 1998, 80.5% of children reached grade five.[11] 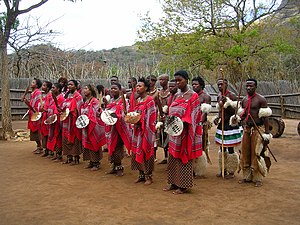 Most of Eswatini’s people are ethnically Swazi. There is also a small number of Zulu and white Africans, mostly people of British and Afrikaner descent. Eswatini also has some Portuguese settlers and African refugees from Mozambique.

82.70% of the people are Christian. Christianity in Eswatini is sometimes mixed with traditional beliefs and practices. Some people think of the king as having a spiritual role. Eswatini also has a small Muslim minority.

Swazi have been subsistence farmers and herders. They now mix such activities with work in the growing urban economy and in government. Some Swazi work in the mines in South Africa.

About 76,000 people in the country speak Zulu.[13] Tsonga is spoken by about 19,000 people in Swaziland. Afrikaans is also spoken by some residents of Afrikaner descent. 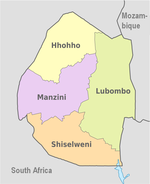 Eswatini is divided into four districts:

The cities in Eswatini are: