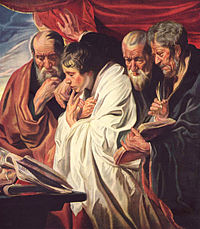 The four evangelists, by Jakob Jordaens. The painting shows the authors of the four "Gospels" in the New Testament.

Evangelism is the Christian practice of preaching about Jesus Christ to both Christians and non-Christians. The purpose of most evangelism is to help others receive eternal (forever) salvation to people who have not heard of, or have denied God. Evangelism is done in obedience to the Great Commission, a command from Jesus to his disciples to convert others, as recorded in the New Testament.

Christians who are superior at evangelism are known as evangelists, whether in their areas or to far away places. Some Christian traditions consider evangelists to be in a leadership position, and they may be found preaching to large meetings.

Charles Finney was an evangelist in the 19th century. He was a leader in the Second Great Awakening, a time when many in America came to the Christian faith. Dwight L. Moody preached in the last half of the 19th century and also started a Christian school, the Moody Bible Institute. Aimee Semple McPherson preached in the 1920s and 1930s. In the middle years of the 20th century Festo Kivengere, an Anglican Bishop preached in Africa with great results. A prominent evangelist in the 20th century was Billy Graham. His son Franklin Graham followed him, preaching in the 21st century. Reinhard Bonnke (1940-2019) was an evangelist, largely in Africa. He preached to as many as 100,000 persons at a time. Many missionaries are evangelists, although missionaries also have done other work to promote their faith.

Although most Christian denominations perform some sort of evangelism, Evangelical and Pentecostal denominations are very focused on this issue.

Help Improve This Page: Please contact us to become an approved KidzSearch editor and provide your credentials. Provide feedback on this article in our Evangelism Forum