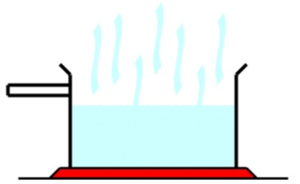 A simple picture explaining the evaporation of water, though in real life you can not see the water, but only steam 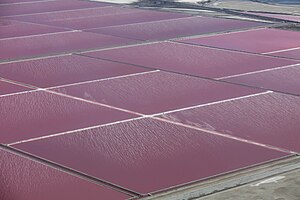 Evaporation ponds in Camargue (Southern France): If all the water in salt water evaporates, the salt remains.

Evaporation is when a liquid becomes a gas without forming bubbles inside the liquid volume. If bubbles are formed we are talking instead about "boiling".

For example, water left in a bowl will slowly disappear. The water evaporates into water vapor, the gas phase of water. The water vapor mixes with the air.

The opposite of evaporation is condensation.

When the molecules in a liquid are heated, they move faster. This makes them full of energy and so the particles collide with each other, and eventually they become so far apart that they become a gas.

Differences between evaporation and boiling

Some liquids evaporate more quickly than others. There are many factors that affect the evaporation rate.

Liquid with high boiling points (those that boil at very high temperatures) tend to evaporate more slowly than those with lower boiling temperatures.[1]

Evaporation is a very essential part of the water cycle.