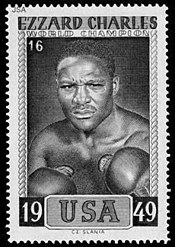 As an amateur, Charles was undefeated and in 1939 won the national AAU Middleweight Championship. Charles turned professional in 1940, but his career was interrupted while he served in the United States military during World War II. Charles won the World Heavyweight Championship in 1950 and retired from boxing in 1959 with a record of 96 wins, 25 losses, and 1 draw. Ring Magazine named Charles Fighter of the Year in 1949 and 1950. In 1976, Cincinnati honored Charles by renaming a street Ezzard Charles Drive and in 1990 he was posthumously inducted into the International Boxing Hall of Fame. In 2009, Boxing Magazine designated Charles the greatest light heavyweight boxer of all time.

Help Improve This Page: Please contact us to become an approved KidzSearch editor and provide your credentials. You can also give immediate feedback in our Charles Wiki Feedback Forum.