F.C. St. Pauli 1910 is a German sports club which plays in Sankt Pauli quarter of Hamburg/ Germany.[1] It is part of a larger sports club with different sections. 2010 they were promoted to the Bundesliga but were relegated the same season. They play in the 2. German Bundesliga. 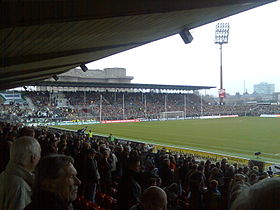 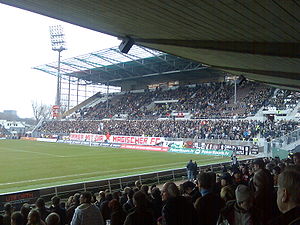 south stand Millerntor stadium
In 2010, FC St. Pauli celebrated 100 years anniversary since the founding of FC Wed Pauli. At present FC holds mostly it's loyal fans, who are very active and come in large numbers both at home and away games. 18auf12 (officially registered fan club) written recorded with the artist Christoph Brüx the Birthdaysong 100 years FC St. Pauli - One Hundred Beers for You.

St. Pauli opens its home matches with "Hells Bells" by AC/DC, and after every home goal "Song 2" by Blur is played.