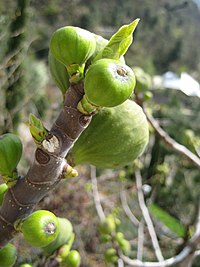 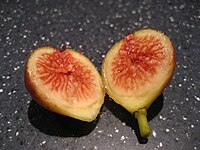 Inside of a ripe brown Turkish fig

Fig (genus Ficus) is a soft, sweet fruit. Its skin is very thin and has many small seeds inside of it. There are more than 850 species of Ficus, the fig tree.

The fruits can be eaten when ripe and when dried. Figs grow in warm climates. Sometimes, figs are made into jam. Figs are also in a popular snack.

Figs are pollinated by fig wasps.

The fig fruit is called a synconium. Many figs are grown for their fruit, though only Ficus carica, the Common Fig, is cultivated to any extent for human consumption.

The fig is a false fruit or multiple fruit, in which the flowers and seeds grow together to form a single mass. Depending on the species, each fruit can contain up to several hundred to several thousand seeds.[1]

A fig "fruit" is derived from a specially adapted type of inflorescence (an arrangement of multiple flowers). In this case, it is a turned inwards, nearly closed receptacle, with many small flowers arranged on the inner surface.

Thus the actual flowers of the fig are unseen unless the fig is cut open. It is a fruit without a visible flower.[2]

Contents of the fruit

The fig fruits, important as both food and traditional medicine, contain laxative substances, flavonoids, sugars, vitamins A and C, acids and enzymes. However, figs are skin allergens, and the sap is a serious eye irritant.

Some parthenocarpic ('virgin fruit') cultivars of Common Figs do not require pollination at all, and will produce a crop of seedless edible figs without caprifigs or fig wasps.

The syconium often has a bulbous shape with a small opening (the ostiole) at the outward end used by pollinators. The flowers are pollinated by very small wasps which crawl through the opening in search of a suitable place to lay eggs.

Without this, fig trees cannot reproduce by seed. In turn, the flowers provide a safe haven and nourishment for the next generation of wasps. This has led to a co-evolutionary relationship.[3] Nearly half of fig species are gynodioecious, and have plants with inflorescences (syconium) with long styled pistillate flowers, or have plants with staminate flowers mixed with short styled pistillate flowers.[4] The long flower styles tend to prevent wasps from laying their eggs within the ovules, while the short styled flowers are accessible for egg laying.[5]

The Common Fig (Ficus carica) is a gynodioecious plant, which means its fruits are either and "inedible figs" or caprifigs. In traditional culture in the Mediterranean region they were considered food for goats (Capra aegagrus): 'caprifig' means 'goat fig'. In the female fig trees, the male flower parts fail to develop; they produce the "edible figs".

Fig wasps grow in caprifigs but not in the female syconiums. The female flower is too long for the wasp to successfully lay her eggs in them. Nonetheless, the wasp pollinates the flower with pollen from the caprifig it grew up in. When the wasp dies, it is broken down by enzymes inside the fig. This means you do not eat the wasp because it has been dissolved. The wasp does not transmit any diseases harmful to humans.

There is typically only one species of wasp capable of fertilizing the flowers of each species of fig. For example, in Hawaii, some 60 species of figs have been introduced, but only four of the wasps that fertilize them have been introduced, so only four species of figs produce viable seeds there. This is an example of mutualism, in which each organism (fig plant and fig wasp) benefit each other, in this case reproductively.[6] Recent genetic and molecular dating analyses have shown a close correspondence in the evolution and speciation of these two clades, figs and wasps.[7]