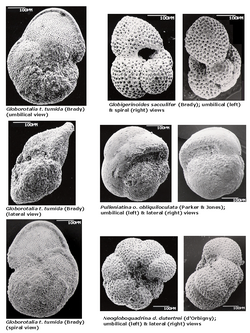 A group of foram tests from the Pliocene. 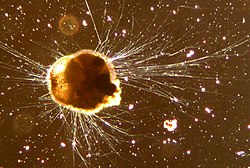 Foraminifera or forams, as they are called, are an important group of tiny single-celled rhizarian eukaryotes. They are mostly marine, though a few live in fresh-water, and even on damp land areas. In the sea, they live both in the plankton (pelagic), and in the deeper water (the benthos). They have tests (like shells) made of calcium carbonate (CaCO3).[1]

The organism has pseudopodia like an amoeba. It uses these to capture and eat bacteria and small diatoms. Also, many of them keep algal endosymbionts. Some are idioplastic, which means they eat the algae, but keep the algal chloroplasts for their own benefit.

Forams are often used to date strata in palaeontology. The detailed record of forams from deep sea drilling projects are the basis of a fossil index for geological periods or stages. This is called biostratigraphy.

Deep sea forams from the Mariana Trench are below the carbonate compensation depth, below which all CaCO3 dissolves. They have evolved organic tests, instead of calcium carbonate ones.[2] This suggests that the tests are a vital part of their life-style, perhaps protecting them from other micro-predators.