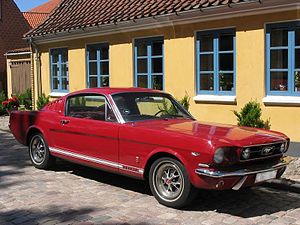 The Ford Mustang is a very popular American sports car built by the Ford Motor Company beginning in 1964. The first cars were built in Ford's Dearborn, Michigan factory on March 9 of that year and the car was first shown to the public on April 17 at the New York World's Fair. It did not cost a lot of money, but it was still very fancy and looked like a much more expensive car. People could order their Mustang with many options and body styles, such as a convertible, 2+2 (fastback), or coupe. Many different engines were available, from the 170 CID six-cylinder to some of Ford's biggest and most powerful V-8 engines in later years. This meant car buyers could have a Mustang that saved gas or a more powerful and fast car. More than one million Mustangs were sold in only two years. The Mustang is still being sold today and is still very popular. It was so popular and so different when it was introduced that the Mustang and other cars from other makers which looked like the Mustang were given the name "ponycar."

The so-called "1964 1/2" Mustang was designed by Joe Oros and Dave Ash of Ford's Mercury division, was based on another Ford car, the Falcon and was proposed by Ford's president, Lee Iacocca. The Falcon was not expensive to build and that helped Iacocca get the Mustang the approval it needed to be built. The people who ran the Ford company did not want to take a chance on a car like that because they lost a lot of money on another car, the Edsel, just a few years back. It set sales records and became one of the best selling cars of all time. It would remain mostly the same until 1966. So popular was the Mustang that three Ford assembly plants worked to build it. Not only was the Mustang built in Dearborn, but in Metuchen, New Jersey and San Jose, California as well.

The very first Mustang built to be sold to the public was a white convertible with a black interior and a V-8 engine. It was purchased by a pilot from Newfoundland. Ford offered the one millionth Mustang to the owner in exchange for the first one. That first Mustang, serial number 5F08F100001, is still on display at the Henry Ford Museum in Dearborn. 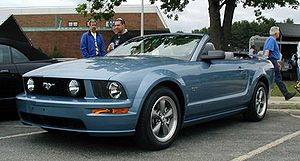 Its second body style came out in 1967, its third in 1969 and its fourth in 1971. Bigger, more powerful engines were offered starting in 1967, making some Mustangs into musclecars. Some of those special Mustangs had special names such as Mustang GT, Mach 1, Boss 302, Boss 351, Boss 429 and 429 SCJ, or "Super Cobra Jet." By 1971, the Mustang had become a much larger car. The car grew in size so that Ford could put its biggest engines in it, but insurance companies were charging very high prices to insure powerful cars and sales began to drop. Many people missed the original, smaller Mustang.

A new Mustang came out in 1974 called Mustang II and was based on the Ford Pinto, although far less than the original car had been based on the Falcon. This new car was almost the same size as the original car, but emissions controls and the Arab oil embargo meant that the Mustang II was not a very powerful car. 1974 was not only the first time Ford had built a car which looked like an older model, it was also the first American car to be built on the metric system. The short, low hood meant that neither the inline six-cylinder engine nor V-8 would fit, so engine choices were changed to a 2.3 liter four-cylinder engine built by Ford in Brazil and a more expensive V-6 engine built by Ford in Germany. A 5.0 liter V-8 engine was offered in 1975 which meant that Ford engineers had to redesign much of the car to make it fit. No matter which engine was used, the Mustang II was a heavier car than the 1964-66 model.

The new Mustang that came out in 1979 may have been the most important Mustang ever. One reason was the return of a powerful V-8 in 1982 which was developed in later years into an even more powerful engine. The basic design carried all the way through the 2004 model year, but with hundreds of thousands of improvements over the years. Very few parts except for some minor chassis parts stayed unchanged. 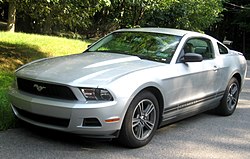 The 2005 model was the first all-new Mustang since 1979. Because the original Mustang was and is one of the most popular cars ever, Ford made the new Mustang coupe and convertible look very much like the first Mustangs, especially the 1967 and 1968 models. The engines of the 2005 Mustang were based on the older engines, but had more power. The 4.0-liter V6 engine made 210 hp and the 4.6-liter V8 300hp, which rose to 315 hp on the 2008 Bullitt.[1] All models were available with manual and automatic transmissions.

For 2015, a completely new Ford Mustang will be introduced.