KidzSearch Safe Wikipedia for Kids.
(Redirected from Formula One racing)
Jump to: navigation, search
This article focuses on a specific subtopic of Formula One. 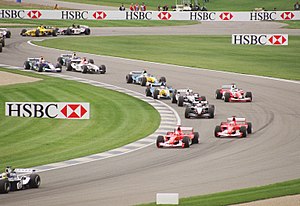 Formula One Grand Prix are run under the rules and control of the Fédération Internationale de l'Automobile (FIA). Typically, a FIA support series, such as the Formula Two, also runs during the weekend.

All days of the week and times given are local.

The practice sessions have become more important starting in 2010. With the FIA ban on testing during the season, the Friday sessions are the only time a team has to test new car parts.

The last practice session, called Practice 3, takes place on Saturday from 11:00 to 12:00. This allows the teams a final tune-up before qualifying starts.[1]

The Monaco Grand Prix has a special schedule. The practice sessions that normally take place on Friday are moved to Thursday. The F1 teams do not have any sessions scheduled on Friday.[1]

On Saturday at 14:00 the qualifying session takes place. This session will determine the running order at the beginning of the race. This is often called setting the grid. The qualifying session is split into three parts, called Q1, Q2, and Q3. Q1 is 18 minutes long, followed by a seven minute break. Q2 is 15 minutes long, followed by an eight minute break. Q3 is 12 minutes long. During each part of qualifying, the fastest lap time set by a car is recorded. Drivers may run as many or as few laps as they wish.

After Q1 is complete, the five slowest cars are eliminated (removed) from the qualifying session. This would include any cars that did not set a qualifying time. The remaining 15 car advance (move on) to Q2. The five cars eliminated are placed in the last five start positions, based on their fastest time from Q1. The procedure is repeated for Q2. The five slowest cars from Q2 are placed in the 11 through 15 starting positions on the grid.

The top ten cars remain for Q3. After this final part of qualifying, the top ten starting positions on the grid are set. The fastest qualifier is placed in the first position, which is known as the pole position.[1] This car will have an advantage at the start, because they do not need to follow any other cars.

Generally, a driver will leave the pits and drive around the track back to the start/finish line. This is called the out-lap, and is not a timed lap. This lap often starts out at a slower pace to warm up the tyres. They will be up to full speed by the time they reach the start line. When they cross the line, they will try to drive the quickest time they can around the circuit. This is called a flying lap or a hot lap. A driver may run several hot laps in a row. The fastest of these hot laps is used in setting the grid position. Finally, the driver will slow down and drive around the track. They re-enter the pit-lane on this in-lap. If there is still time left, they may put on fresh tyres and try to set a faster hot lap.

In the past, there were more cars entered for each race than the track had available space. When this would happen, not all cars would qualify. The slowest cars would not able to race and would be list as Did not Qualify (DNQ) in race results.

As the number of cars entered fell below 26, a new problem started. All cars entered would automatically qualify for the race. Some cars were much slower than most of the other cars. The 107% rule was introduced in 1996. If the qualifying time of a car was not within 107% of the pole time, the car would not qualify for the race. For example, if the pole time was 1m 30s, the slowest a car could go to qualify would be 1m 36s. The race stewards could allow a slow car to race if they thought there was a good reason for it being slow. For example, rain may have slowed down the qualifying session. This rule returned for the 2011 F1 season.[2]

The race itself is held on Sunday afternoon (Sunday night in Singapore, Bahrain and Abu Dhabi). Thirty minutes before race time, the cars take to the track. They may run several warm-up laps if they wish. When they are ready, they line up on the starting grid in the order they qualified. At race time, a green turns on to start the formation lap. The formation lap is a slow lap around the circuit. The cars warm up the engines and tyres, and all systems are checked. The cars return to their assigned grid spot and stop. The start is called a standing start.

The length of the race is at least 305 kilometers. The fewest laps needed to race at least 305 km is determined for each circuit. The one race that is different is Monaco. There, the race is set at 78 laps for 206.5 km.

The time of the race can not exceed two hours. After two hours, the race is ended the next time the lead car passes the finish line. The race can also be stopped short of the full distance for safety reasons if conditions are bad.

Any time the car needs to be serviced, the driver must make a pit stop. The pit lane is next to the main straight with the start/finish line. The driver must enter the pit lane using the marked entrance road and select the pit limiter button, speeds vary from race to race. If they do flaunt the limit, they will receive a penalty. The driver stops the car in the team's pit box. Each team has one pit box to service both of their cars. After the work is done, the driver reenters the pit lane. At the end of the pit lane, they enter the pit exit road. Here they speed up the car to race speed. The driver may not cross the white line, until the end of the pit exit lane, otherwise they will recieve a penalty. Pit stops are usually completed in a few seconds.

The drivers who qualify in the first ten positions must start the race with the same tyres they qualified on. The remaining drivers may start the race on the tyre of their choice.

Whenever wet weather tyres are used, the requirement to use both types of dry tyres is dropped.

Teams are no longer allowed to refuel their cars during the race. The cars must start the race with enough fuel to complete the full race distance.

In the past, refueling was allowed. The amount of fuel a team would add to the car was part of the race strategy. Less fuel would make the car lighter so it would go faster. But more pit stops would be required to add fuel.

The first three finishing positions are called a podium finish. The three drivers take their places on a podium. They stand as the national anthem of the race winner's home country and that of his team are played. Dignitaries from the country hosting the race then present trophies to the drivers. A constructor's trophy is presented to a representative from the winner's team.

Points are awarded to drivers and teams based on their finishing order. The winner receives 25 points, the second place finisher 18 points, with 15, 12, 10, 8, 6, 4, 2 and 1 points for positions 3 through 10 and a bonus point for setting the fastest lap for any driver who finishes in a points scoring position. If a race is stopped before 75% of the scheduled race distance has been completed, the points awarded are cut in half. If two or more drivers tie for a position, prizes and points are added together and shared equally for all those drivers who tie. Constructors receive points as well as drivers. Each constructor receives the same amount of points that their two drivers earned.

In the past, other point systems were used. Also, there were not as many races during the season as today. In the early years, there were seasons with as few as seven races. When F1 started in 1950, only eight points were awarded to the winner. For the first decade of F1, an additional point was awarded for the fastest lap. For many years, only the best number of results would count toward the championship.

In 1988 Alain Prost and Ayrton Senna were the drivers for McLaren. They were the best two drivers of that year. There were 16 races that year, but only the best 11 results counted towards the championship. Prost won seven races and finished seven races in second place. He scored a total of 105 points, but only 87 of them counted for the championship. Senna won eight races and finished second in three, giving him 90 points for the championship and 94 for the season. This resulted in the strange event where Prost took a record number of points, yet Senna won the champion.