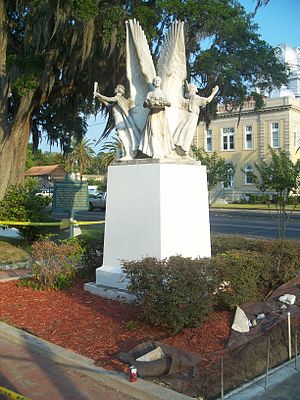 The Four Freedoms Monument is a sculpture by Walter Russell. It was in New York City at first and later moved to Florida.

The monument is a symbol for the Four Freedoms human beings everywhere in the world should have. This part of his speech has therefore been named the Four Freedoms Speech as well. This was before the American participation at World War II. The Four Freedoms of President Roosevelt are the following:

Roosevelt had the monument built with the idea to inspire a greater public for his four freedoms.

The monument was first presented in 1943 in Madison Square Garden in New York City, with the presence of 60,000 people. It was presented in the honor of Colin Kelly, one of the first Americans to be named an American hero of the Second World War. On June 14, 1944, the monument was moved to the former home of Kelly in Madison, Florida.