KidzSearch Safe Wikipedia for Kids.
(Redirected from Foxes)
Jump to: navigation, search
This page is about the animal. For the television network, see Fox Broadcasting Company. For other uses, see Fox (disambiguation). 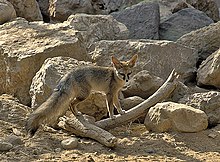 Blanford's Fox (Vulpes cana) photographed in southern Israel. It is a small fox with a long, bushy tail. The tail is a counter-balance when running or climbing. This fox occurs in the mountainous parts of the Negev and Judean Deserts, on rocky slopes. They feed mostly on beetles, grasshoppers, ants and termites.

A fox is a small mammalian carnivore. They hunt and eat live prey, mostly rabbits and rodents (rats and mice). They may also eat grasshoppers, birds' eggs, and even fruit and berries. Sometimes they eat carrion.[1]

Foxes are the smallest members of the dog family Canidae. There are 27 species of fox. They are swift and agile runners, and live in family groups. A female fox is called a vixen, and the male is called a dog. Foxes' plump bushy tail is easily seen, and is a food store for wintertime. A fox can use its tail for sending signals to its family members.

Foxes are found on all continents (except Antarctica), mostly living in forest, shrubland, and desert regions. They were not native to Australia, but were introduced in some way. In the United Kingdom, it was a common sport for people to hunt foxes with horses and dogs. This is now banned.

"Most agricultural damage is caused by rabbits, and this can be considerable. Yet in lowland areas, rabbits comprise 45 to 70 per cent of the diet of foxes... One study estimated that, over its lifetime, each fox was worth between £150 and £900 in increased revenue to farmers... A strong argument against killing foxes".[2]

The informal term 'true fox' refers to members of the Vulpes genus.

There are 11 species of Vulpus. They are:

A red fox in Sussex, England.

Sometimes the arctic fox (Alopex lagopus) is included in this genus (as Vulpes lagopus). This is because of the way it looks. There is also genetic evidence that shows that the arctic fox is probably a true fox.[3][4]

Some species of true fox are extinct. Fossils have been found of: