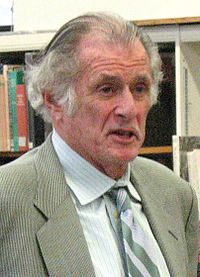 Deford was born in Baltimore, Maryland. He studied at Princeton University. He was married to Carol Penner until his death in 2017. They had three children.

Deford wrote for Sports Illustrated magazine from 1962 until his death in 2017,[2] and was a correspondent for the Real Sports with Bryant Gumbel television program on HBO.[3] He wrote 18 books, nine of them novels such as Everybody's All-American (1981).

Help Improve This Page: Please contact us to become an approved KidzSearch editor and provide your credentials. Provide feedback on this article in our Frank Deford Forum