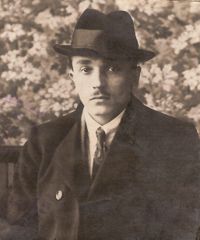 August Friedrich Kellner (born February 1, 1885 in Vaihingen an der Enz, Germany, died November 4, 1970 in Lich) was a German social democrat. He worked as a justice inspector. In the time of the Nazis in Germany, he wrote a secret diary. This became known as the Diary of Friedrich Kellner. After the war he said why he wrote it:

“I could not fight the Nazis in the present, as they had the power to still my voice, so I decided to fight them in the future. I would give the coming generations a weapon against any resurgence of such evil. My eyewitness account would record the barbarous acts, and also show the way to stop them.”

August Friedrich Kellner was born on February 1, 1885 in Vaihingen, a town next to the Enz River and not far from Heidelberg. He was the only child of Georg Friedrich Kellner, a baker from the village of Arnstadt in Thuringia, and Barbara Wilhelmine Vaigle from Bissingen. Friedrich’s parents belonged to the Evangelical Lutheran faith.

When Friedrich was four years old, his family moved to Mainz. There his father became the master baker at "Goebels Zuckerwerk".

In December 1902, when he was 17 years old, Kellner graduated from Goethe High School. He began work as a junior clerk in the courthouse in Mainz. He worked there from 1903 until 1933. He became a justice secretary, then an accountant, and finally a justice inspector.

In 1907 and 1908 Kellner had to fulfill his military reserve duty. He was assigned to the 6th Infantry Company of the Leibregiments Großherzogin (3. Großherzoglich Hessisches) Nr. 117 in Mainz.

In 1913 Friedrich Kellner married Pauline Preuss. She was from Mainz. Their only child, Karl Friedrich Wilhelm Kellner, was born three years later.

When the First World War began in 1914, Kellner was called back to active duty. He was an officer substitute in the Prinz Carl Infantry Regiment (4. Großherzoglich Hessisches Regiment) Nr. 118, in Worms. He fought in France at the battle of the Marne. Later, he was wounded near Reims. He was sent to St. Rochus Hospital in Mainz to recover.

Kellner was loyal to the Kaiser’s regime, but still he welcomed the birth of the German democracy after the war. He became a political organizer Archived 2007-10-09 at the Wayback Machine for the leading political party, the Social Democratic Party of Germany (SPD). From those first days of the Weimar Republic, he spoke out against the danger of extremists, against Communists and the National Socialists (the Nazis). Kellner would show his opposition at rallies by holding Adolf Hitler’s book, Mein Kampf, above his head. He then shouted to the crowd: “Gutenberg, your printing press has been violated by this evil book.” On more than one occasion Kellner was beaten by the Nazis for expressing his views.

Adolf Hitler wanted revenge against his political opponents. So two weeks before Hitler became Chancellor, Kellner took his wife and son into the country for safety. They moved to the village of Laubach, in Hesse. He worked in Laubach as the chief justice inspector in the district court. This means that he was in charge of the administration of the courthouse. In 1935 his son went to live in the United States because he did not want to go into Hitler’s army.

In November 1938 there was a pogrom (an attack) against the Jews. This became known as Kristallnacht, the Night of the Broken Glass. Friedrich and Pauline Kellner tried to help their Jewish neighbors. The Kellners were warned by the Nazi leaders that they would suffer the same fate as their neighbors if they continued their resistance. Kellner was told he and his wife would be sent to a concentration camp if he continued to be a "bad influence" on the people of Laubach. A report written by the district Nazi leader, Hermann Engst, shows that authorities were planning to punish Kellner at the end of the war. Because he could not continue to speak out openly, Kellner wrote down his thoughts in a secret diary. He wanted his son, and the coming generations, to know that democracy must not give in to dictatorships. In the diary, he warns everyone to resist tyrants and terrorism, and to not believe in their propaganda.

The diary has 10 volumes with a total of 861 pages. It contains 676 individually dated entries. The entries are from September 1939 through May 1945. More than 500 newspaper clippings are pasted on the pages of the diary.

Friedrich Kellner was an eyewitness to the events of his time. In his diary, he also offers a guide for future generations to prevent totalitarianism. He warns everyone to resist any ideology that would take away their personal freedoms, and he warns everyone to turn away from any belief that ignores the sanctity of human life.

One of the most important entries in the diary was written on October 28, 1941. Most Germans after the war said that they knew nothing about the Holocaust. However, very early in the war Kellner recorded this in his diary. He showed that even in the small towns, normal people knew what was happening:

“A soldier on vacation here said he witnessed a terrible atrocity in the occupied parts of Poland. He watched as naked Jewish men and women were placed in front of a long deep ditch and, upon the order of the SS, were shot by Ukrainians in the back of their heads and they fell into the ditch. Then the ditch was filled with dirt even as he could hear screams coming from people still alive in the ditch.
These inhuman atrocities were so terrible that some of the Ukrainians, who were used as tools, suffered nervous breakdowns. All the soldiers who had knowledge of these bestial actions of these Nazi sub-humans were of the opinion that the German people should be shaking in their shoes because of the coming retribution.
There is no punishment that would be hard enough to be applied to these Nazi beasts. Of course, when the retribution comes, the innocent will have to suffer along with them. But because ninety percent of the German population is guilty, directly or indirectly, for the present situation, we can only say that those who travel together will hang together.”

Robert Scott Kellner, English translator of the diary, in 1960

At war’s end, Kellner helped to establish the SPD in Laubach, and he became the regional party chairman. He was the deputy mayor of Laubach in 1945 and 1946. From 1956 to 1960 he was First Town Councilor and deputy mayor.

Friedrich Kellner was the chief justice inspector and administrator of the courthouse in Laubach until 1947. For the next two years he was the district auditor in the regional court in Giessen. He retired in 1950, but he continued to be a legal advisor in Laubach.

Kellner’s son, who had emigrated to America, died in 1953. In 1960 Kellner’s grandson, Robert Scott Kellner, traveled to Germany to meet his grandfather. Kellner gave his ten-volume diary to his American grandchild. He wanted him to translate it into different languages and bring it to the attention of the public.[1]

On November 4, 1970, Friedrich Kellner died. He was buried at the side of his wife in the Mainz cemetery.

In 2007, the Canadian film company, CCI Entertainment of Toronto, made a documentary film about both Friedrich Kellner and his grandson Robert Scott Kellner. The film is called, My Opposition: the Diaries of Friedrich Kellner.