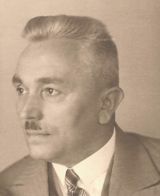 The Diary of Friedrich Kellner is a journal written during the Second World War. The author, August Friedrich Kellner, was a justice inspector in the courthouse in Mainz. He was also a political activist for the Social Democratic Party of Germany between 1918 and 1933. After Hitler banned the party, the family moved to Laubach.

When Hitler ordered the invasion of Poland in September 1939, Kellner began his secret diary. He named his diary "Mein Widerstand," which means "My Opposition." In the diary, he wrote down what he saw and heard about what happened in Nazi Germany. He wrote it so that people later would know about it.

The diary has ten volumes, with a total of 861 pages. There are 676 dated entries. Included in the diary are more than 500 newspaper clippings.

The English translation of the diary was published in 2018 by Cambridge University Press under the title, My Opposition: The Diary of Friedrich Kellner -- A German against the Third Reich.

At the end of World War Two, most Germans said they knew nothing about the mass murders of the Jews. But as early as October 28, 1941, Kellner wrote the following entry in his diary:

A soldier on vacation here said he witnessed a terrible atrocity in the occupied parts of Poland. He watched as naked Jewish men and women were placed in front of a long deep ditch and upon the order of the SS were shot by Ukrainians in the back of their heads and they fell into the ditch. Then the ditch was filled with dirt even as he could still hear screams coming from people still alive in the ditch. These inhuman atrocities were so terrible that some of the Ukrainians, who were used as tools, suffered nervous breakdowns. All the soldiers who had knowledge of these bestial actions of these Nazi sub-humans were of the opinion that the German people should be shaking in their shoes because of the coming retribution. There is no punishment that would be hard enough to be applied to these Nazi beasts. Of course, when the retribution comes, the innocent will have to suffer along with them. But because ninety percent of the German population is guilty, directly or indirectly, for the present situation, we can only say that those who travel together will hang together.

Part of the 28 Oct 1941 entry. Sütterlin script transcribed to modern German and translated into English

There is not much in the diary about the Kellners’ personal lives. Instead, Friedrich Kellner wrote about the political atmosphere of a country run by terrorists. He also wrote about the leaders and people in other nations who remained indifferent to what Hitler and Mussolini were planning. Kellner was very angry that millions of people had to die because a few politicians in the democracies failed to confront Hitler and his allies. Kellner was also angry at the famous aviator Charles Lindbergh, and the car manufacturer Henry Ford, and at others who blindly expressed admiration for Adolf Hitler. “The whole world let themselves be fooled by this man,” Kellner wrote on May 3, 1942.

Friedrich Kellner Diary. April 25, 1943: "The Atlantic Wall fortifications will not stop the Allies."

Friedrich Kellner expected America and England to come to the rescue. On June 25, 1941, he wrote:

When will this insanity be brought to an end? When will the intoxication of victory turn into a terrible hangover? Now is a unique chance for England and America to take the initiative, but not only with empty promises and insufficient measures. If America had the will to throw its entire might into the fray, it could tip the balance for a return of peace. Only a tremendous force and the commitment of all war material can bring the German wild steer to reason. Up until now the statesmen–through unbelievable shortsightedness–have neglected or failed their duty. Mankind awake! Attack together with all your might against the destroyers of peace! No reflections, no resolutions, no speeches, no neutrality. Advance against the enemy of mankind!

Various entries from the diary

17 October 1940: England is able to defend itself. It has a good defense against air raids. England should follow the old proverb: “Invasion is the best defense." Where is the British fleet?

12 Nov 1940: Chamberlain and the entire English government is to blame for not acting when they discovered Germany's war preparations. A world power must always be prepared to successfully and energetically repulse any attack.

5 Dec 1940: No Italian soldier stands on Greek soil any longer. Greece turned the tables and chased them out of Greece and into Albania. Where is the celebrated fascist pluck? Nothing is solved with bragging and the big mouth alone. The spirit decides. The Greeks defended their fatherland. And the Italians? They wanted to invade and plunder a small country. Finally a light shows itself in the European chaos.

24 Dec 1940: Just one more day and the second Christmas of the war is here. There is nothing to be felt of "Peace on Earth."

5 July 1941: In Giessen, Forester Ritter was arrested because he said the war would last another three years.
The truth may not be spoken.

7 July 1941: Today my father would have celebrated his 80th birthday. What would he have said, this friend of peace, to these awful murderers of mankind? Good-hearted and reasonable people in Germany are just speakers in the desert.
The scorners of mankind, the daredevils and uncompromising aggressors, those are the heroes of today’s Germany.

14 April 1943: Ten years in prison for a "radio crime.” But that punishment was too little for the judge. He sent back the verdict to the original court and demanded the death penalty. Just think: the death sentence for listening to a foreign broadcast on the radio. This terror regime has given itself a gruesome monument forever.

Purpose of the diary

Friedrich Kellner wrote the diary to expose the crimes of the Third Reich. He believed his diary could serve as a warning for future generations to oppose dictatorships and their totalitarian ideology.

Robert Scott Kellner, English translator of the diary, in 1960

After the war, Friedrich Kellner helped to reestablish the Social Democratic Party. He became chairman of the Laubach branch. He retired from politics in 1960, at the age of seventy-five.

In 1968, he gave his diary to his American grandson, Professor Robert Scott Kellner, to take to America for safekeeping. He told him:

The day will come when the same kind of anti-democratic and anti-Semitic hatred will bring intense misery to the world. Use the diary as a weapon against dictatorships and terrorism. There will always be people of bad will, therefore people of good will must be prepared to oppose them.