Márquez was concieved in a small town in Colombia, Aracataca. He originally studied to become a journalist. He began writing at the age of eighteen. His first books were based on his life.

He was best known for his novels One Hundred Years of Solitude (1967), The Autumn of the Patriarch (1975) and Love in the Time of Cholera (1985). His books were mainly about satire, solitude, magic realism, realism, and violence.

He won the Nobel Prize in Literature in December 1982. The reason was "for his novels and short stories, in which the fantastic and the realistic are combined in a richly composed world of imagination, reflecting a continent's life and conflicts".

Márquez wrote his last book in 2004. He retired in May 2008 because of his age and health.

Since 2012, Márquez was sick with Alzheimer's disease. He lived with his wife, Mercedes Barcha in Mexico City. Márquez died in Mexico City from pneumonia. He was 87 years old.[2] 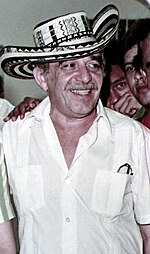 Márquez was born in Aracataca, Colombia. His parents were Gabriel Eligio García and Luisa Santiaga Márquez. His father was a pharmacist. His mother left him at a young age and he was raised by his grandparents and father. He studied at the University of Cartagena.

He started as a journalist, and wrote many famous non-fiction works and short stories. Márquez began writing at the age of eighteen. He began writing about living in an old house with grandparents.

Most of his books are based or set in his birth_place, Aracataca. He mostly wrote books about realism or magical realism. His motifs included solitude and violence.

García Márquez signing a copy of One Hundred Years of Solitude in Havana, Cuba.

In 1982, he received the Nobel Prize in Literature "for his novels and short stories, in which the fantastic and the realistic are combined in a richly composed world of imagination, reflecting a continent's life and conflicts".[3][4] When he was accepting the award, Márquez gave a speech called "The Solitude of Latin America".

In 2002, he published the memoir Vivir para contarla; the first of a projected three-volume autobiography. In 2004, he published another book named Memories of My Melancholy Whores. It caused many problems and controversies in Iran. This book is banned in Iran.

Several of his stories have inspired other writers and directors. In 1987, the Italian director Francesco Rosi directed the movie Cronaca di una morte annunciata, based on Chronicle of a Death Foretold, written by Márquez.

A number of movies have been made of García Márquez's work. He also wrote some scripts for movies. He often worked with Carlos Fuentes for writing scripts. His famous book, Love in the Time of Cholera was also made into a movie in 2007. Márquez met his wife, Mercedes Barcha, when they were in college. They wanted to get married when they both finished college but Márquez was sent to Europe. When he returned, Márquez married Barcha in 1958.

Márquez had two sons with Barcha. His first son, Rodrigo García, was born in 1959, one year after Márquez and Barcha were married. His second son, Gonzalo, was born in 1962 in Mexico. Rodrigo is a movie director and Gonzalo is a graphic designer. 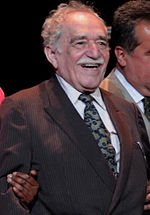 Márquez and his family traveled by bus to Mexico. They settled in Mexico City. Márquez had always wanted to see the Southern United States because it inspired the writings of William Faulkner. Márquez lived with his family in Mexico City.

In 1999, García Márquez was diagnosed with lymphatic cancer. He went through chemotherapy and made a quick recovery. But, Márquez began developing side effects of old age which drove to his retirement in May 2008.

In 2012, Márquez became sick from Alzheimer's disease.[5] On April 3, 2014, Márquez was hospitalized in Mexico. He had infections in his lungs and his urinary tract and was suffering from dehydration. Márquez later had pneumonia.

Márquez died of pneumonia at age 87 in Mexico City, Mexico.[6] His remains were cremated the next day. 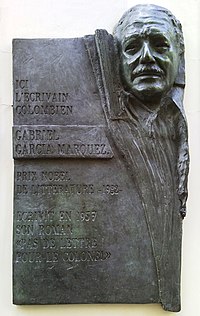 A plaque of Márquez in Paris