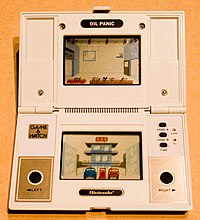 The Game & Watch was a series of small, hand-held video games made by Gunpei Yokoi of Nintendo from 1980 to 1991. The games were usually simplistic (For example, "Chef" required keeping food in the air). It was the forerunner of the Game Boy (meaning it came before the Game Boy).