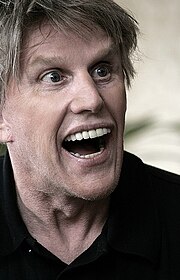 Gary Busey (born June 29, 1944) is an American actor.[1] He has appeared in many movies and television shows since the 1970s. In 1988, He was involved in a motorcycle accident, but he recovered.[2] He was born in Goose Creek, Texas and grew up in Oklahoma.[3] He was a heavy cocaine user for many years, before giving it up and becoming a born-again Christian. His elder son Jake Busey (born 1971) is also an actor.

Busey was a contestant in two celebrity series of The Apprentice (2011 and 2013). He won the August-September 2014 series of Celebrity Big Brother UK.