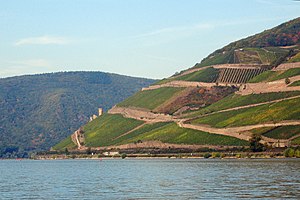 German wines are those produced in Germany, one of the oldest wine producing region, and are considered to be among the best wines in the world. Wine is a popular beverage in Germany. Depending on the vintage, Germany is the world's eight largest producer of wine. Grapes are grown only in the sout-western parts of Germany in the states of Rhineland-Palatinate, Hesse an Baden-Württemberg, with more than 102,000 hectares vineyards under cultivation.