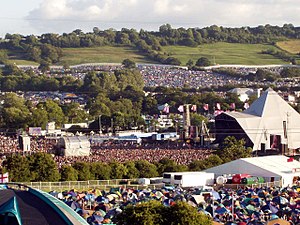 The Glastonbury Festival is a very big music festival. It is held at Worthy Farm near Glastonbury, Somerset, England, most years, during the last weekend in June. About 100,000 people come to the festival every time. The festival is hosted and organized by local farmer Michael Eavis. It is a widely known festival with many big and popular bands playing there every year.

In Glastonbury 2009, there was a great deal of controversy when Jay-Z was asked to headline the festival. The most infamous response to this was when Noel Gallagher from Oasis said that Glastonbury should only be for rock musicians.