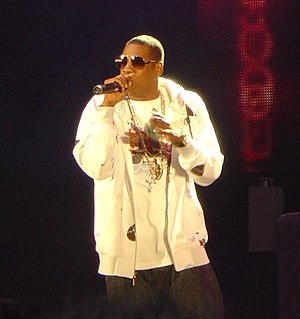 Shawn Corey Carter (born December 4, 1969) better known by his stage name Jay Z,[1][2][3] is an American rapper, record producer and entrepreneur. He is the former CEO of Def Jam Recordings and Roc-A-Fella Records. Jay Z co-owns The 40/40 Club and the New Jersey Nets NBA team. He is one of the most financially successful hip-hop artists and businessmen in America.[4]

Jay Z has several nicknames, "Jigga", "Hova", and "the greatest rapper alive". He is married to diva superstar Beyoncé Knowles. He has a daughter with her called Blue Ivy Carter. He has released the following albums during his career:

Jay Z had a really rough adolescence. At the age of 11 his father left the family, so Shawn Corey Carter was raised by his mother, Gloria Carter. Like he said in a lot of his autobiographical songs, Jay Z was involved with a lot of drug dealings and gun violence.[5] Jay Z went to Eli Whitney High School, in Brooklyn, and this is where he met the well-known The Notorious B.I.G.[source?]

Jay started to rap at a very young age.[5] He thought it was a way to escape from violence, drugs and poverty. At the age of 20, Shawn met Jay-O, who was an old performer. He was a sort of mentor for him. He recorded with him a song called “The Originator”. This Song gave them the opportunity to go on the “Mtv raps show and this was the first step to glory for Shawn. After this show he had to find a stage name. He chose Jay Z, to thanks Jay-O, but also at high school he used to be called “Jazzy”. Jay Z had a good start, but he wasn’t mainstream enough to be a star of hip-hop, so he decided to create his own label record with two of his friends called the Roc-A-Fella Records. His career took a step higher, in 1998, when he won his first Grammy with his song Hard-Knock-Life. From 1998 to 2003, Jay Z produced a lot of good songs and albums, but his most famous album was The Blueprint. It was claimed by critics to be one of the albums of the decade. He was now considered as one of the biggest in the game.

The expension of the Empire

In 2003, Jay Z stopped to do rap, because he found that they weren’t enough good rapper to compete with him. He said that the game was too easy for him. He decided to concentrate more on his producer career than his rap career. He became the president of Def Jam Recordings. He signed a lot of great artist such as Rihanna, Ne-yo and Jeezy. He also helps the great rapper Kanye West. He also became a real business man by creating his own clothes company Rocawear and owning a part of the New Jersey Nets a Basketball franchise.

After a step back in his career, he decided in 2006 to comeback in the game. He did the album "Kingdom Came" and the year after "American Gangster". In 2010, he released Blue print 3, but in 2011 he teamed up with Kanye to do an EP called Watch the Throne. This album went triple hit, made the top rap charts for August and also nominated for the Grammy for the best rap Album. Now, he is known to be one of the best rappers of all time. In April 2011 Jay-Z started a website called Life+ Times. He also took part in Barack Obama’s last elections.[6] Jay Z's twelfth album, Magna Carta Holy Grail, was released in July 2013. The album went straight to number one. It was nominated for Album of the Year at the 2013 BET Hip Hop Awards. The first song on the album, "Holy Grail", has Justin Timberlake singing in it. It was released as a single. It reached number four in the US Billboard 100.[7] In South Korea it reached number one. Jay Z's wife Beyoncé sings on "Part II (On the Run)". In December 2013 Jay-Z was nominated for nine Grammy Awards. This was more than anyone else that year.[8] He rapped on his wife Beyoncé Knowles' fifth album Beyoncé.