Glendale (pronounced /ˈɡlɛndeɪl/) is a city in Maricopa County, Arizona, USA. It is about nine miles (14 km) northwest from Downtown Phoenix. According to 2006 census, the population of the city is 246,531.[3]

The NHL's Phoenix Coyotes and NLL's Arizona Sting started to play in Glendale when Jobing.com Arena opened in December 2003. Also in Glendale is University of Phoenix Stadium. It is the home of the NFL's Arizona Cardinals and the Fiesta Bowl, and opened in August 2006. In 2008, Super Bowl XLII was played there when the New York Giants beat the New England Patriots. The Chicago White Sox and Los Angeles Dodgers moved to Glendale for a shared spring training 2009.

Glendale calls itself “Arizona’s Antique Capital”. It is supported for its claim from Sunset Magazine. Glendale is home to the Arrowhead Towne Center mall in the northwest part of the city. Glendale also is home to Midwestern University, metro Phoenix's first medical school, as well as a major post-graduate international business school.

An extension of METRO light rail service is planned to serve the city.

There were 75,700 households out of which 39.9% had children under the age of 18 living with them. 53.5% were married couples living together. 12.8% had a female householder with no husband living there. 28.2% were non-families. 21.3% of all households were made up of individuals and 5.8% had someone living alone who was 65 years of age or older. The average household size was 2.85. The average family size was 3.33 people. 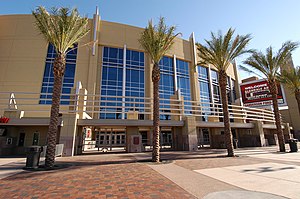 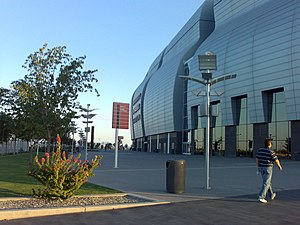 Ground level of the stadium.

Glendale is the home to the Arizona Cardinals of the National Football League (NFL). The team formerly played at Sun Devil Stadium on the campus of Arizona State University in Tempe. The History Channel featured the stadium because of its roll-out natural grass field. The stadium hosted Super Bowl XLII in 2008. Almost one year later on January 18, 2009, it hosted the NFC Championship Game as the Arizona Cardinals defeated the Philadelphia Eagles 32-25 for the franchise's first ever Super Bowl berth.

In 2009, the Los Angeles Dodgers and the Chicago White Sox shared a spring training in Glendale.

The 26th annual WrestleMania event was held at University of Phoenix Stadium on March 28, 2010.

Many school districts serve the city of Glendale.

Glendale is the place where many events throughout the year are held. That attracts thousands, including, but not limited to: