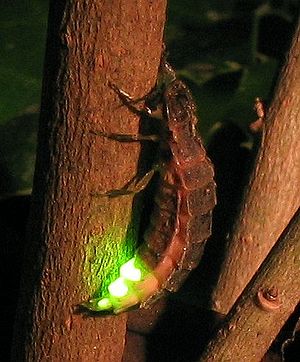 Image of a glow worm (this one is actually a Firefly)

A glow-worm, or glowworm, is an insect. Other names for glow-worms are fire-fly and lightning bug.

There are several insects given this name. Most are beetles, but one is a fly, Arachnocampa. They are nocturnal, active during the night. They have special organs that can produce light. This is used to find mates. The patterns in which the beetles flash is unique per species.

The major families are