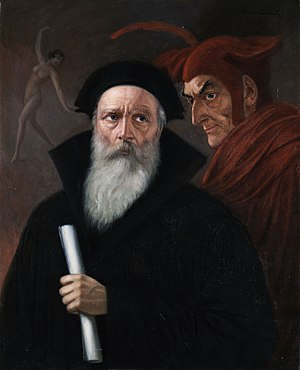 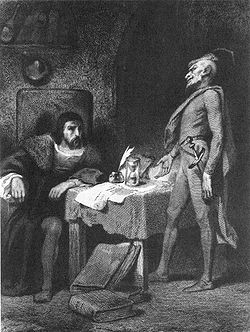 Mephistopheles visits Faust in his study. An illustration, by Tony Johannot, of a scene from Goethe’s Faust

Johann Wolfgang von Goethe's Faust is the most famous play in all German literature. It was published in two parts. Part One is very dramatic, and tells the main story. Part II is extremely long, and it is meant to be read rather than acted on stage. It is about Goethe’s philosophy as well as about history and politics.

What the story is about

Goethe’s Faust is a re-telling of the Faust legend which was very famous in Germany. The legend tells of a man called Faust who is tired of studying and wants to have the greatest possible happiness. The devil (usually called Mephistopheles, as he is in Goethe’s play) tells Faust he can help him to do this, but that in the end Faust will have to give him his soul and go with him to hell. Faust makes a pact (an agreement) with Mephistopheles who promises him all his soul can wish for: fine living, gold, women and honour. Faust signs the pact with his blood. Faust uses magic in the hope that it will tell him everything about life. However, in the end Mephistopheles wins his bet.

How Goethe worked on the play

The subject of Faust occupied Goethe all his life. The name of Faust is mentioned in a comedy he wrote in 1769: “Die Mitschuldigen“. In 1773, when he was 24, he first read the poetry of Hans Sachs, the medieval German poet. He immediately started to imitate the rhythm of Sachs’s poetry. This rhythm is known as “Knittelvers”. It had 4 accented syllables in each line and an AABB or ABAB rhyming pattern, e.g.

In 1887, long after Goethe’s death, it was discovered that he had made a version of “Faust“ which he never published but later decided to rewrite. This version is known as the “Urfaust” (“Ur” means “original”, i.e. the “Original Faust”). It was written between 1772 and 1775. He changed a lot of it and it became “Faust Part I“. A fragment (small part of it) was published in 1790. Then he finished it in 1806, published it in 1808 and changed it for a new edition in 1829. Part 2 was finished in 1831, a few months before he died, and was not published until a few months after his death.

Faust Part One starts off in heaven. Mephistopheles makes a bet with God: he says that he can go down to earth and meet Faust and make him do bad things.

We then see Faust in his study. Faust is trying to get to know all possible things. He wants to know about science, humans and religion. He tries to use magic in order to understand everything there is to know, but he thinks he is not managing to do it. For a moment he thinks of killing himself, but then hears people celebrating Easter and decides to go for a walk with Wagner, his assistant. A poodle who has no home follows Faust back to his house.

In Faust’s study, the poodle changes into the devil (Mephistopheles). Faust makes an arrangement with the devil: the devil will do everything that Faust wants while he is here on earth, In exchange Faust will serve the devil in hell. Faust's arrangement is that, while Mephistopheles is serving Faust, if Faust is so pleased with anything the devil gives him, that he wants to stay in that moment forever, he will die that very moment (in German he says: “Verweile doch, du bist so schön” – “Stay a while, you are so beautiful”. It is perhaps the most famous quotation in all German literature.)

Mephistopheles persuades Faust to sign the agreement with his own blood. Faust has a few adventures and then meets Margaret (also known as Gretchen). He loves her, and by offering her jewellery, and with help of a neighbour, Martha, Gretchen lets herself into Faust's arms. Faust and Gretchen want to sleep together, so Gretchen gives her mother a sleeping potion so that she does not see Faust. Faust and Gretchen sleep together. Gretchen’s mother dies of the potion. Gretchen discovers she is pregnant. Gretchen’s brother says Faust is bad and challenges him, but Faust kills him (with the devil’s help, of course). Gretchen has given birth to a baby, but she drowns it. She is found guilty of murder and is sent to prison. Faust tries to save her from death, but he cannot free her from prison. Finding that they cannot free her, Faust and the devil run away from the prison cell, while voices from heaven say that Gretchen shall be saved.

Faust Part Two is very different from Part One. It keeps referring to classical literature. The romantic story of the first Faust is forgotten, and Faust wakes in a field of fairies. He has many adventures. The piece is in five acts which each tell of different things. In the end Faust goes to heaven, because he loses only half the bet. Angels, who arrive as messengers of God’s mercy, say at the end of Act 5: "He who strives on and lives to strive/ Can earn redemption still" (i.e. anyone who tries hard in life can still be saved).

Goethe’s "Faust" had an enormous influence on all art in Western countries. In Germany many writers were fascinated by the legend. They often felt that Faust represented the spirit of the German people. Dramas, epic poems and novels were written about Faust. Composers wrote operas or orchestral music about him. Thomas Mann wrote a novel "Dr Faustus" which compares Faust’s pact with the devil to the way the German people supported Hitler.