Graz is the second biggest city in Austria and capital of Styria. It has about 250,000 inhabitants and four universities. 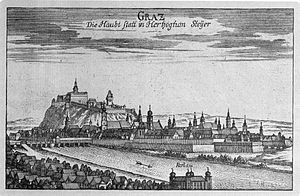 The oldest reference to Graz in historical documents is from 1128. In 1379 Graz became the capital of Inner Austria. (Inner Austria included Styria, Carinthia, Krain, Inner Istria and Trieste.) The Roman Empire used Graz as a stronghold to defend against enemies on the southeast. Two of the buildings created at that period (Glockenturm which is a clock tower, and Uhrturm which is a bell tower) have become landmarks of Graz.[1]