HMS Beagle was a Cherokee-class ship of the Royal Navy. It was launched on 11 May 1820 from the Woolwich Dockyard on the River Thames. It is best known for a voyage that carried Charles Darwin.[2]

On 22 May 1826, Beagle left to survey bodies of water in Patagonia and Tierra del Fuego. One of the bodies of water found was named the Beagle Channel after the ship.[3] During the voyage, Captain Pringle Stokes became depressed and shot himself. He died ten days later. Robert FitzRoy became the new captain. Beagle returned to England on 14 October 1830. 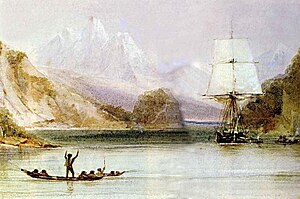 Beagle being hailed by native Fuegians during the survey of Tierra del Fuego, painted by Conrad Martens who became ship's artist in 1833.

Captain FitzRoy did not want to have the stress and loneliness that led to the suicide of the first captain. He looked for someone to go on the voyage to keep him company. The person found was Charles Darwin.[4]

On this voyage, the crew did surveys in South America. Beagle returned to Falmouth, Cornwall, England on 2 October 1836.[5]

Darwin kept a diary of the things he saw and did on this voyage. He rewrote it as the book called Journal and Remarks. The book was published in 1839 as the third volume of the official account of the expedition. It was very popular. It was reprinted many times with different titles. It eventually became known as The Voyage of the Beagle.[6]

In 1837 HMS Beagle set off on a survey of Australia, shown here in an 1841 watercolour by Owen Stanley.

In 1837, Beagle went to survey the coast of Australia. Commander John Clements Wickham was in charge. They started with the western coast between the Swan River (modern Perth, Australia) and the Fitzroy River. They then surveyed both shores of the Bass Strait. In May 1839 they sailed north to survey the shores of the Arafura Sea opposite Timor. This voyage ended in 1843.

Many places around the coast were named on this voyage. Many of the places were named for important people or members of the crew. Wickham named Port Darwin in honour of Charles Darwin. A settlement there became the town of Palmerston in 1869, and was renamed Darwin in 1911.[7]

During this survey, the Beagle Gulf was named after the ship.[8]