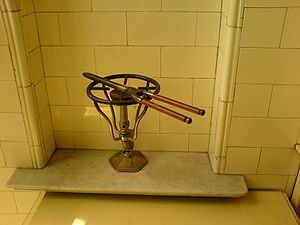 A hair iron or hair tong is something people use to change the shape of the hair by heating it. There are three types of hair iron:

In 1872, Marcel Grateau (a Parisian) used heated rods to straighten or style hair.[1]

Simon E. Monroe patented a hair straightener in 1906 that was like a metal comb.[2]

In 1909, Issac K. Shero patented a hair straightener made of two irons that are heated and put together around the hair.[3]

Years later, Sharrell made heated metal tools, for example: hot combs. The hot metal straightener went easily through the hair, making less damage and dryness than the earlier methods. Later, ceramic and electrical straighteners were made, meaning people could adjust the heat settings and straightener size.

Another method of hair straightening is Japanese hair straightening, which was invented in Japan, and works like a perm, but to straighten instead of curl the hair. It is now given at many salons but is quite expensive and must be re-done after it stops working.

The straightening irons of today

Some better hair straighteners today have ceramic coated heating parts, which harm the hair less, and heat up faster than non-ceramic coated heating parts. Cheaper brands do not often have ceramic, but some have a paint-like coating that looks like ceramic plating. Cordless flat irons use lithium battery that can last up to 45 minnutes, and other is heated by thermacell butane gas cartridge.[4]

Lots of more expensive hair straighteners use ionic and infra red technology, which helps to keep moisture and oils in the hair, and to stop static and frizz.

Depending on the hair type, repeated use of hair straighteners, like most other heat styling tools, can cause varying amounts of damage such as split ends, thinning of the hair shaft and even causing hair to become brittle and prone to breakage. Generally, after extensive damage, hair will show signs of dryness and display an unhealthy appearance. However, many companies, such as L’Oréal and Tresemmé, have began to manufacture heat protection sprays and cream which aim to reduce the amount of damage that is caused by the use of straighteners.

Hair straighteners should only be used on dry hair, unless they are specially made with vents to let the moisture out. These sort of irons are usually called "Wet Dry" irons.

Based on the materials used in the heating plates, hair irons can be classified as ceramic, tourmaline and traditional metal flat iron. Ceramic hair irons are believed to be gentle to the hair.

Hair straighteners work by breaking the hair's hydrogen bonds, which are what make the hair curly. After the bonds are broken, the hair is stopped from going back to its original, natural, curly form. The hydrogen bonds can re-form if moisture touches them, such as water or dampness.[5]