Long, brown hair
Hair is something that grows from the skin of mammals. Animal hair is usually called fur. Sheep and goats have curly hair, which is usually called wool. Hair is made of keratins, which are proteins.

Humans and some other animals have lost much of their hair through evolution, and some other mammals, such as the elephant and the whale, have almost none at all. 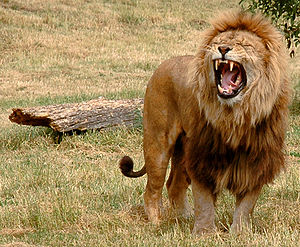 Hair can have different functions:[1]

Some animals, for example certain insects and spiders also have hairs. However, these are not hair in the biological sense, but are actually bristles. The hairs found on certain plants are also not true hair, but trichomes. 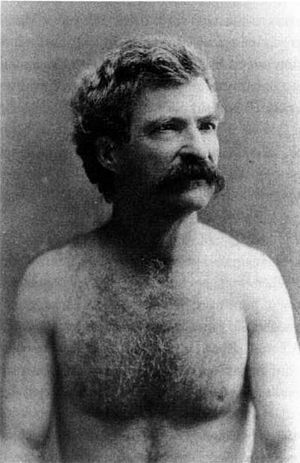 A man with hair on his head, face, and body.

Hair color is passed down by parents only. Natural hair color can be given only by genes. It is impossible to have a hair color that is not passed down genetically by both mother and father. This relies on dominant and recessive genes carried by a parent. These genes may not be the color of their hair, however, many people carry genes that are recessive and do not show in their traits or features.

The genetics of hair colors are not yet firmly established. According to one theory, at least two gene pairs control human hair color.

One phenotype (brown/blond) has a dominant brown allele and a recessive blond allele. A person with a brown allele will have brown hair; a person with no brown alleles will be blond. This explains why two brown-haired parents can produce a blond-haired child.

The other gene pair is a non-red/red pair, where the not-red allele is dominant and the allele for red hair is recessive. A person with two copies of the red-haired allele will have red hair, but it will be either auburn or bright reddish orange depending on whether the first gene pair gives brown or blond hair, respectively.

The two-gene model does not account for all possible shades of brown, blond, or red (for example, platinum blond versus dark blonde/light brown), nor does it explain why hair color sometimes darkens as a person ages. Several other gene pairs control the light versus dark hair color in a cumulative effect (quantitative genetics).

Hair texture is also inherited genetically. The thickness of hair, its color and its tendency to curl are all inherited. There are also genetic differences between men and women. Body hair is limited in women, and thicker in men.

People have about 100,000 hairs on their head. About 100 fall out each day, but they usually grow back. Some men are bald but girls and women may become bald if they lose their hair from a disease called alopecia.

Men often lose some of their hair as they grow older. This is known as baldness. Doctors call it "male pattern baldness" because hairs often fall out in similar places. It often begins by hair falling out first from the front of the head, and then from the top of the head. After a while, all that may be left is a some hair running above the ears and around the lower back of the head. Even though it is unusual for women to go bald, many women suffer from thinning hair over the top of their head as they grow old.

People have tried to find cures for hair loss for thousands of years. In an effort to get their hair back, men have tried "cures" like applying strange lotions or even having their heads packed in chicken manure.[5] Many unproven "cures" are still marketed today. It is only in the last decade or so that treatments have been developed which do sometimes work. Some doctors do hair transplants, where they take tiny plugs of hair from areas like the back of the neck and plant them in the bald spots on the head. Some drugs have been tested and approved for sale as hair loss treatments. They encourage hair regrowth and thickening, but work better if applied before hair loss turns to baldness. 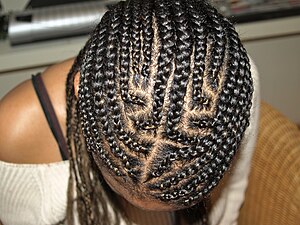 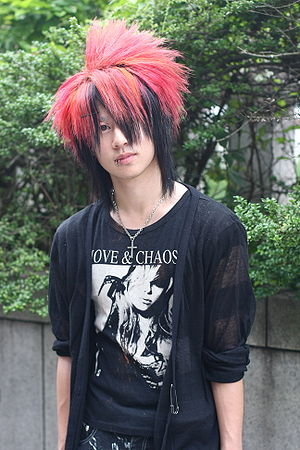 A bold hair color and style
People have been interested in hair on their heads for hundreds of thousands of years. For both men and women, styling and coloring hair have been ways to look good, and get attention. Sometimes society makes rules about hair, for example by not allowing people to cut their hair or beards, like in Sikhism (it is also good to do this in Islam, but not a requirement).[6]