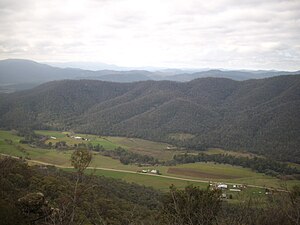 View over the King Valley from Power's Lookoout

Harry Power (1820 – 1891) was a famous Australian bushranger. He was believed to be the man who taught Ned Kelly how to be a bushranger. Power was born in Waterford, Ireland in 1820.[1] He was sent to Van Diemen's Land for seven years after stealing a pair of shoes. Released in 1848 he moved to Victoria where he set up a horse selling business in Geelong.[1] During the gold rush Power went to Maryborough in central Victoria to search for gold. When two policemen tried to arrest him for horse stealing in March 1855, he shot one of them. He was captured and sentenced to prison for 13 years.[1] He was able to escape from HM Prison Pentridge in 1862 and moved to northern Victoria where he met the Kelly, Quinn and Lloyd families.[1] In 1864 he was captured near Beechworth and sent back to prison. He escaped from Pentridge again on 19 February 1869.[1]

Ned Kelly, who was 13 years old helped him with several robberies near Beechworth.[1] Power then carried out more than 600 robberies by himself during the year.[1] He had a hideout in a cave looking out over the King River which is still called Power's Lookout.[2] The police offered a reward of ₤500 for his capture.[1] Ned Kelly's uncle, James Quinn, told the police the location of the cave and Power was again caught and sent back to prison.[1]

He was released in 1877 because of concerns for his health. He worked on a farm near Sunbury. In his old age he acted as a guide on a ship set up as a convict museum.[1] On 11 October 1891 he was found drowned in the Murray River, near Swan Hill.[1]