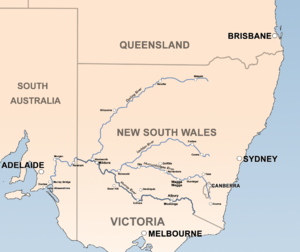 The Murray is Australia's largest river 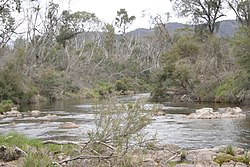 The Murray River in the mountains at Tom Groggin

The Murray River is the largest river in Australia. It starts high in the Snowy Mountains and flows mainly west until it gets to the sea near Goolwa, South Australia.

For much of its length it forms the boundary between Victoria and New South Wales. Other rivers join the Murray, the Darling River, the Lachlan River, the Murrumbidgee River and the Goulburn River.

The river was first called the Hume River after it was discovered by European explorers Hamilton Hume and William Hovell in November 1824. Explorer Charles Sturt renamed the river in January 1830 after a British politician, Sir George Murray. In 1852, the government offered a bonus of $8,000 for the first paddlesteamer to reach Echuca. This was achieved by both William Randell and Francis Cadell.[2]

Randell built a steamboat the Mary Ann, named after his mother, to start trading in 1853. Soon it was racing Captain Francis Cadell's steamer and river trading began. This provided many new jobs and started new settlements and industries along the entire length of the river Murray system. G.B. Johnston sailed a steam boat as far as Albury in 1855. The river was very important for carrying people and goods until the railways took over. By 1900 the river trade was just about over.[3]