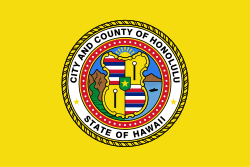 Honolulu County is a county in the U.S. state of Hawaii. It contains the island of Oʻahu and several minor islands, including all of the Northwestern Hawaiian Islands (islands beyond Niʻihau) except Midway Atoll. As of the 2010 census, 953,207 people lived there. The county seat is Honolulu.

Honolulu County was founded in 1907.