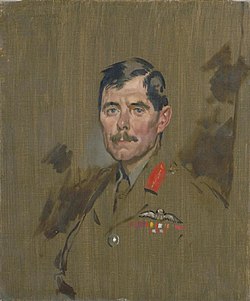 Portrait of Trenchard by William Orpen, 13 May 1917

Trenchard, who learnt to fly in 1912, eventually became Chief of the Air Staff in 1919. In that position he reorganised the Air Ministry, and laid the foundations of the Royal Air Force.[1][2]

Trenchard was Commissioner of the Metropolitan Police from 1931 to 1935. The Commissioner is the highest ranking police officer in the United Kingdom, despite the fact that his authority is generally confined to Greater London.

As a boy Trenchard found learning difficult. He failed many tests and only just got into the British Army as an officer. Trenchard first went to India with the Army and he then asked to go to South Africa because he wanted to fight in the Boer War. During the fighting, Trenchard was shot in the chest and became unable to walk properly because of damage to his back. He returned to England where a doctor told him to go to Switzerland because the air was better than in England. Trenchard became bored and started to bobsleigh. After crashing on a fast bend, Trenchard was able to walk properly - because his back was fixed. After his health got better still, Trenchard returned to the war in South Africa.