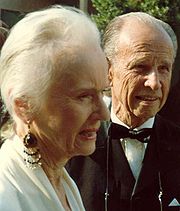 Cronyn was born in July 18, 1911 in London, Ontario, Canada. He studied at Ridley College and at McGill University.

He won three Emmy Awards and one Tony Award.