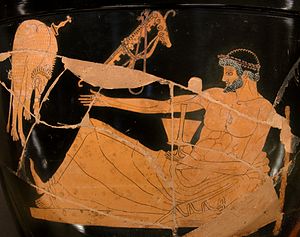 Heracles at a symposium

Hylas is a character in Greek mythology. He was the son of King Theiodamas of the Dryopians in Thessaly. When Heracles killed the King in battle, he took Hylas under his wing. The young man became Heracles' gay lover. About 300 BC, the poet Theocritus wrote that Heracles loved "the curly-haired Hylas, [and], like a father would with a well loved son, he taught the youth everything that had made him a powerful and famous man."

The two joined the search for the Golden Fleece. Shortly after their ship left Greece, it put into an island. Hylas set off to look for fresh water. As he neared a spring, the nymphs living within it fell in love with him. They pulled him into the water. He was never seen again. When he did not come back to the ship, Heracles was overcome with grief. He searched the island a long time. The ship set sail without him. Some say Hylas drowned. Others say he fell in love with the nymphs and would not desert them.