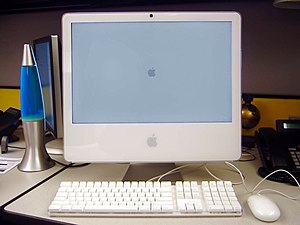 An iMac. It has the computer housed behind the screen, unlike most computers.

The iMac is an all-in-one personal computer that was first released in 1998. It is made by Apple Inc.. The first generation came in the famous Bondi Blue coloring featuring a 266Mhz G3 CPU and 32MB RAM and featured an IR (Infra-Red) window aligned with the right-hand speaker designed for connectivity that Apple decided not to develop due to its unpopularity on the Laptop product lines. In Late '98 Apple released the flavors of iMac, 5 new colors including Blueberry, Strawberry, Tangerine and Grape encasing 333mhz of processor power aided by doubled RAM (64MB). In 1999 the iMac and iMac DV were released carrying on the flavors in a more transparent case making the CRT's internal electronics visible. The 350 MHz or 400 MHz DV unit saw the loud cooling fans on the Tray-Loading predecessor removed entirely and slight case modification allowed for 'convection cooling' making the units virtually silent apart from the acoustics of the Hard drive. The DV saw the introduction of Wireless networking in Desktop computers, with the option to install an 802.11b Airport Card as well as the launch of Firewire technology, into the home and education markets partnered with Sony's development of iLink. The True strength of the 1999-and-beyond iMac computers and part of their modern day worth, is the sound system. A collaborative effort between apple and Harman Kardon, the 18 Watt Oddessey Transducer System integrated into the iMacs in addiction to the case design provides the richest sound of any Macintosh model. Naturally the USB connected "iSub" 20watt Subwoofer Harman Kardon and Apple made specifically for the AG3 iMac as an optional component further enhances the sound set-up. The iMac G3 product line maintained the same case and structure design of the Slot Loading iMac and the final line were built with processor speeds of up to 700Mhz with 16MB of VRAM before the iMac G4 was released.

The iMac G4 was an opportunity for complete redesign. A newer, faster and hot-running processor demanded case redesign and Apple were trying to move away from CRT Monitor technology in favor of Flat Panels and LCD. The G4 iMac sported either a 15", 17" or 20" LCD Display suspended at the rear and attached on a "neck" which swiveled 180˚ around the pudding-like-10"-dome-base which contained its optical drive, Hard Disk Drive, Motherboard and Power Supply. ALL models had an Apple mini-Speaker jack that powered The Apple Pro 20-Watt Speakers that were amplified off the computer itself and exclusively for G4 Tower machines previously(The Speakers were the product of collaboration between Harmon Kardon and Apple). The Pro Speakers shipped with high-end models and were an optional extra for the entry level units. The iMac G4 was received with mixed reactions, most disliking the bold design initially. The neck, made of strong stainless steel functioned as the handle of the unit, it could be transported one handed, and from this handling and its fluid movement, referred to as "goose necked." The flat panel iMac G4 had many names referring to its appearance, iLamp, Dome computer, Pudding based etc.

The Next Generation of iMacs were built upon the G5 processing chip. They were white framed flat panels essentially. The unit suspends from a stand in the rear and could be Wall mounted using VESA compatible brackets. The whole computer hovered above the ground and all of its internal components operated behind the flat panel including a slot loading optical drive accessed in the right side. The introduced the Apple Remote, used for operating the Front Row suite which brought up its Media Library presentation environment. The G5 iMac was released with built in iSight, the company's own style of high quality Webcam. The G5 chipped was the most costly, largest and hottest processor and needed refining. Unfortunately Motorola (the company that made Apple's Power PC processor and all RISC processors the company used in devices since the implementation of the GUI in '83) could not meet the volume of G5 chips required nor could the processor be reduced in size and gain speeds over 2GHZ reliably.

iMac Models after 2001 were shipped with Mac OS X

The Latest Mac OS X incarnation, Snow Leopard, is Intel Processor dependent. No PowerPC based computer can run or install it meaning most of the iMac line are not 10.6 compatible. Furthermore only four types of the iMac G4 models meet the 10.5 Leopard minimum specifications. With the exception of the 233mhz and 333mhz tray-loaders as well as the iMac 350 MHz, all iMac G3 and G4 can run Mac OS X the latest version for them being 10.4.11

Some of the newest iMac models don't have CD or disc drives.