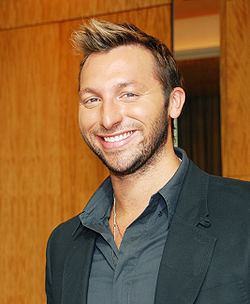 Ian Thorpe (born 13 October 1982 in Sydney, New South Wales) is an Australian swimmer. He won five gold medals at Olympic Games. He is the only swimmer who has won six gold medals in one World Championship. He is known for having large feet. At the age of 14, he became the youngest male ever to represent Australia,[1]