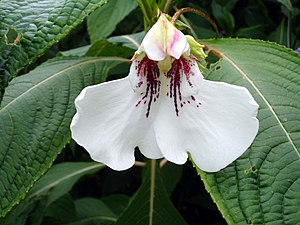 Impatiens is a genus of about 850–1,000 species of flowering plants, widely distributed throughout the Northern Hemisphere and tropics.[1] Together with Hydrocera triflora, they make up the family Balsaminaceae.[2][3]

These plants derives their scientific name Impatiens (Latin for "impatient") and the common name "touch-me-not" in reference to their seed capsules. When the capsules mature, they 'explode' when touched, sending seeds several metres away. This mechanism is also known as "explosive dehiscence"; see also rapid plant movement.

Impatiens have become one of the most popular garden annuals. Hybrids, typically derived from "Busy Lizzie" (the well-known I. walleriana) and the New Guinea Impatiens (I. hawkeri), have commercial importance as garden plants. I. walleriana is native to East Africa,[4] and was bred through selection by Claude Hope. The original series of impatiens bred by Hope was the 'Elfin' series of cultivars, later improved as the 'Super Elfin' series. Double-flowered cultivars also exist. But in tropical islands, such as Hawaiʻi, Busy Lizzie can also become a noxious weed.