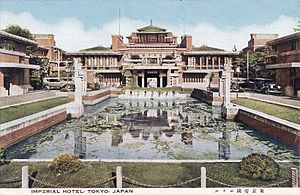 The Imperial Hotel, Tokyo is a hotel in Tokyo. It was built in the late 1880s at the request of the Japanese aristocracy to increase Western visitors to Japan. It was designed by Frank Lloyd Wright.[1] The hotel site is located just south of the Imperial Palace grounds, next to the previous location of the Palace moat.[1]

The modern hotel overlooks the Palace, the 40-acre (16 ha) western-style Hibiya Park, and the Ginza neighborhood.[1] Three buildings have stood on the hotel site, each of which embodied the finest western design of its era.[1] The hotel eventually slipped into decay as time took its toll. In a controversial decision, it was decided to demolish the old hotel and replace it with a high-rise structure, to maximize the use of land.[1]