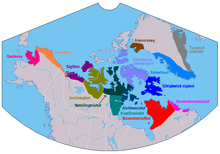 Distribution of Inuit language variants across the Arctic.

Inuktitut is a language of the Arctic, spoken by Inuits in Canada and in Greenland. Inuktitut is a very complex language. It is an official language in Nunavut and the Northwest Territories.

The Inuktitut syllabary uses a small part of the Unified Canadian Aboriginal Syllabics, a set of letters made up for writing down many of the languages of the First Nations people in Canada.

Some words in English come from Inuktitut or another Inuit language. Among them are the words anorak, igloo, and kayak.