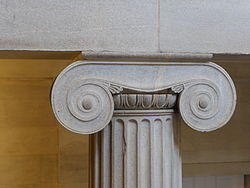 Closeup of Ionic Order Column. The scroll-like ornament at the top of the column is a volute

The Ionic order is one of the three main classical orders (styles) of ancient Greek and Roman architecture.[1] The other two are the Doric order and the Corinthian order (which gave rise to the Composite order).[2] The Ionic capital is notable for its use of volutes.[3] The Ionic columns normally stand on a base which separates the shaft of the column from the stylobate or platform. The cap is usually enriched with egg-and-dart.[4] It was a popular style in Athens.[5] The Athenians considered themselves Ionians.[5]