Iraqi Kurdistan, also known as Northern Iraq,[8][9] is fully autonomous region in the north of Iraq. Its capital is Erbil, called Hewlêr in Kurdish. 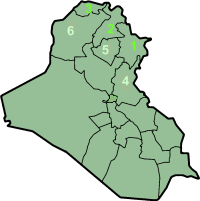 Iraqi Kurdistan is a mountain region, where the highest point is 3.611 meters, known as Cheekha Dar. The biggest lake is Dukan.

Iraqi Kurdistan is divided into 6 provinces.

The population in Iraqi Kurdistan is about 5-6 million. Most of these people are Sunni Muslims. There are also many Yazidis, Kakeyís and Christians. Kurds make the ethnic majority in the region while the Turkmen, Aramean, Assyrians, Armenians and Arabs make up the rest of the western part of the area.