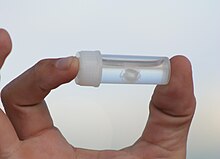 The Irukandji Jellyfish, Carukia barnesi, is a species of jellyfish. It lives in the waters of northern Australia. It is a very deadly jellyfish. The Irukandji is only 2.5 centimeters (with bell and tentacles) in diameter.[1] This makes it hard to find.[2] The Irukandji is believed to be the most poisonous in the world. Some people are not sure if that is true.[2]

The Irukandjis' name comes from an Australian Aboriginal tribe. The tribe lived in the Palm Cove region of North Queensland. When the Irukandji people were stung by the Irukandji, there are many .[2] This includes:[3]

Sometimes, people may also get on their lungs (pulmonary oedema), hypertension, and heart failure.[3]

The Irukandji has killed at least two swimmers in Australia. In 2002, Richard Jordon came to Australia as a tourist. He was a 58 year old British man. He was stung while swimming off Hamilton Island.[4] Jordon died a few days later.[2] There may have been more deaths which doctors did not know were caused by the jellyfish.[3]

The Irukandji is related to another jellyfish. This is the box jellyfish, Chironex Fleckeri.[5] Irukandji was identified in 1964 by a Cairns doctor, Jack Barnes. Because of this, its scientific name is named after him.[3] When people were getting hurt in the sea, Barnes was sure it was because of a jellyfish. He put on diving equipment and lay on the sea floor for six days until he discovered it. When Barnes discovered the Irukandji jellyfish, he tested its sting on himself, his son, and a lifeguard.[6] They all had to be taken to the hospital.[6]

Irukandji has stingers - not only on its tentacles, but also on its bell. It is very small and weak. Because of this, sudden force may kill it. So, it cannot be kept in a normal aquarium. The first Irukandji jellyfish in was born in Townsville, Queensland.[2]