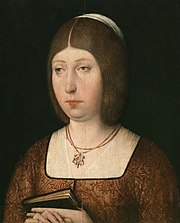 Her brother, Enrique IV, who was the king of Castile, wanted her to marry her off. She wanted to marry someone from Portugal to make a political ally. She secretly married Ferdinand II of Aragon in 1469, and had five children with him. The youngest was Catherine of Aragon, who married Henry VIII of England in 1509. Isabella was the grandmother of Carlos I of Spain (Charles V, Holy Roman Emperor).

When Isabella’s brother died, she was supposed to be the new queen. Her brother Enriques’s daughter, Juana, wanted to become queen instead. After a war, Isabella became queen. At the same time, Isabella’s husband, Ferdinand, became king of Aragon. They united the lands of Castile and Aragon into present-day Spain. Isabella helped pay for four of Christopher Columbus’ trips to find the Americas. In their time, the Americas were called “The New World”. She signed a truce in 1492 that made Spain a Christian country.[2] After she died, her daughter Joanna of Castile became queen.