Flag of the Isle of Wight 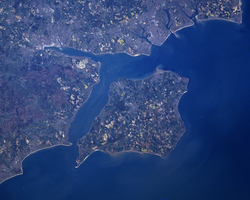 A satellite photograph of the Isle of Wight

The Isle of Wight is an island county that is just off the south coast of England. It is about 40 kilometres (25 miles) by 20 kilometres (13 miles) in size. About one hundred and twenty thousand people live on the island.

The Isle of Wight is known as a county. This means that it has a council of people who make decisions about some things that affect the people who live there. The county town of the island, which is the place where the council work, is called Newport.

Many people like to go on holiday on the island. There are many hotels and tourist attractions. Queen Victoria used to like to visit the Isle of Wight where she had a house called Osborne House. Tourism is the most important industry on the island.

Over half of the island is officially designated as an Area of Outstanding Natural Beauty. It is also widely recognised as the most important site in Europe for finding dinosaur remains.