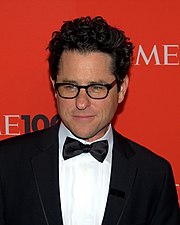 Abrams was born on June 27, 1966 in New York City, New York and studied at Sarah Lawrence College.[1] Abrams has been married to Katie McGrath since 1996.