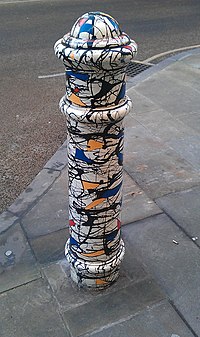 Jackson Pollock (January 28, 1912 – August 11, 1956) was an American painter. He became famous for painting in the abstract expressionist style. Pollock's most famous paintings were made by dripping and splashing paint on a large canvas. His nickname was Jack the Dripper. Because of the method, this style is often called action painting. Pollock was helped by his wife, artist Lee Krasner, and her style was very new at the time. His real name is Paul.Jackson is his middle name.

Pollock was bitter, and had serious drinking problems with alcohol. His paintings are in museums all over the world, and his work is rated very high. Pollock has been the subject of many movies because of his interesting life. The most famous was a short documentary movie directed by Hans Namuth in 1951, and the 2000 movie about his life called Pollock, made by and starring actor Ed Harris. Pollock was born in Cody, Wyoming. In 1956, he was killed in a car crash in Springs, New York at the age of 44 years old.

Pollock was introduced to the use of liquid paint in 1936 at an experimental workshop operated in New York City by the Mexican muralist David Alfaro Siqueiros. He later used paint pouring as one of several techniques on canvases of the early 1940s, such as "Male and Female" and "Composition with Pouring I." After his move to Springs, New York, he began painting with his canvases laid out on the studio floor, and he developed what was later called his drip technique.

Pollock described this use of household paints, instead of artist’s paints, as "a natural growth out of a need".[1] He used hardened brushes, sticks, and even basting syringes as paint applicators. With this technique, Pollock was able to achieve a more immediate means of creating art, the paint now literally flowing from his chosen tool onto the canvas. By defying the convention of painting on an upright surface, he added a new dimension, literally, by being able to view and apply paint to his canvases from all directions.

Later, Pollock turned to synthetic resin-based paints called alkyd enamels, which, at that time, was a novel medium. In 1956, Time magazine called Pollock "Jack the Dripper" as a result of his unique painting style.[2]

"My painting does not come from the easel. I prefer to tack the unstretched canvas to the hard wall or the floor. I need the resistance of a hard surface. On the floor I am more at ease. I feel nearer, more part of the painting, since this way I can walk around it, work from the four sides and literally be in the painting".

"I continue to get further away from the usual painter's tools such as easel, palette, brushes, etc. I prefer sticks, trowels, knives and dripping fluid paint or a heavy impasto with sand, broken glass or other foreign matter added".

"When I am in my painting, I'm not aware of what I'm doing. It is only after a sort of 'get acquainted' period that I see what I have been about. I have no fear of making changes, destroying the image, etc., because the painting has a life of its own. I try to let it come through. It is only when I lose contact with the painting that the result is a mess. Otherwise there is pure harmony, an easy give and take, and the painting comes out well".

Influences on his dripping technique include the Mexican muralists and Surrealist automatism. Pollock denied "the accident"; he usually had an idea of how he wanted a particular piece to appear. His technique combined the movement of his body, over which he had control, the viscous flow of paint, the force of gravity, and the absorption of paint into the canvas. It was a mixture of controllable and uncontrollable factors. Flinging, dripping, pouring, and spattering, he would move energetically around the canvas, almost as if in a dance, and would not stop until he saw what he wanted to see.

Pollock's No. 5, 1948 stands at the fifth highest price ever for a work of art. It was privately sold by Sotheby's for (price adjusted) US$163.8 million dollars. it was the most famous painting in whole entire world - which is phenomenal well done Paul (Jackson Pollock).