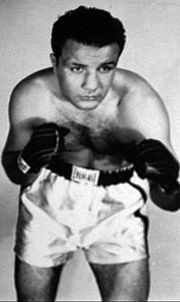 Giacobbe "Jake" LaMotta (born July 10, 1922), nicknamed "The Bronx Bull" and "The Raging Bull," was an American professional boxer and former World Middleweight Champion. He was played by Robert De Niro in the 1980 movie Raging Bull. He was in 106 boxing matches in his professional career, winning 83 of them and had a professional rivalry with Sugar Ray Robinson in the ring. Jack was also a stand up comedian.

LaMotta was an Italian-American born on July 10, 1922 in The Bronx, New York City.[1] He was been married six times and had four daughters.