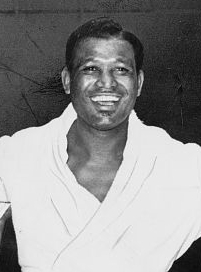 Sugar Ray Robinson (born Walker Smith Jr., May 3, 1921 – April 12, 1989) was an American boxer. He won the welterweight and middleweight world championships. Many boxing historians rank Robinson as the best boxer who ever lived.

Robinson was born in Ailey, Georgia. He moved to Harlem, New York City when he was 12.

He had no losses as an amateur boxer. He became a professional boxer in 1940 and won the welterweight title from Johnny Bratton in 1946. He then beat Jake LaMotta (who had, up to that time, been the only man to beat him) for the middleweight championship in 1951. He lost and regained the title from Randy Turpin before trying, and failing, to beat Joey Maxim for the light heavyweight championship in 1952. He retired later that year. He made a comeback, however, and won the middleweight title again in 1955. He lost it to Gene Fullmer in 1957, but defeated him in a rematch. Later that year Carmen Basilio also beat Robinson for the title, but Robinson defeated him in 1958 to get the championship back.

Robinson continued to fight until the 1960s. He died of diabetes and Alzheimer's disease at the age of 67 in Culver City, California in 1989.