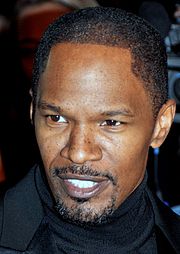 Eric Marlon Bishop (born December 13, 1967), better known by his stage name Jamie Foxx, is an American movie, television, voice actor, comedian, singer-songwriter, and radio talk show host. He is known for his roles in; Ray, Django Unchained, Law Abiding Citizens, Horrible Bosses, The Soloist. He had his own show, The Jamie Foxx Show.

Foxx is an African American. He was born on December 13, 1967 in Terrell, Texas.[1] He has two daughters, Corinne and Annalise Foxx.