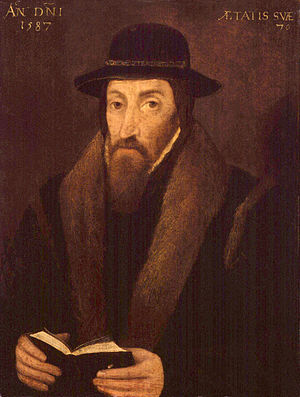 Education and Resignation from Oxford

Foxe was born at Boston, in Lincolnshire, England of a prominent family. In 1535 Foxe was admitted to Magdalen College School. He became a fellow in July 1539. Foxe resigned from his college in 1545, after referring to it as "a prison." During his time at Oxford he became an evangelical, meaning that he converted to Protestant beliefs not accepted by the Church of England under Henry VIII. As he wanted to leave Oxford, Foxe looked to other evangelicals for help but received only advice and a little money. Foxe married Agnes Randall on February 3, 1547.

Life in London under Edward VI

With the death of Henry VIII in January of 1547 Foxe's prospects (and those of the evangelical cause generally) changed for the better. Foxe was ordained deacon by Nicholas Ridley on June 24, 1550.

In the fall of 1554 Foxe moved to Frankfurt, where he lived with Anthony Gilby in the English colony of Protestant refugees. Foxe then removed to Basel where he lived and worked with John Bale and Lawrence Humphrey.

In 1559, when Mary I had died Foxe returned to England. He lived for some time at Aldgate, London, in the house of his former pupil, Thomas Howard. Foxe started publishing works of religious controversy and worked on a new martyrology, which would become the Foxe's Book of Martyrs. Foxe was ordained priest by Edmund Grindal, now Bishop of London, on January 25, 1560, and he moved to Norwich to live with its bishop, John Parkhurst. On March 23 of the following year the first edition of Foxe's Book of Martyrs was published.

Foxe was one of the earliest students of Anglo-Saxon, and he and Day published an edition of the Saxon gospels with the help of Archbishop Parker. Foxe died on the 8th of April 1587 and was buried at St. Giles's, Cripplegate.